What is the Millstone Scholars Program?

We want our children to know the robust history of ideas and events that flow throughout the majestic journey of the Jews, from the Exodus to a vibrant contemporary Jewish democracy in modern Israel.

The Tikvah Millstone Scholars Toronto Program is a unique one-year opportunity for students in grade 7 and 8 to study the great ideas and leaders of Jewish and Western civilization, Zionism, and the heroic story of modern Israel.

Students will meet locally at the Lipa Green Centre/Prosserman JCC for weekly in-person discussion-based seminars with peers and master teachers. Designed for students in public or private schools, Millstone Scholars engage in a one-year sequence of an in-person core seminar and online electives, combined with special events and guest speakers. In an era of declining Jewish identity and rising anti-Semitism, the Millstone Scholars Program aims to create confident and knowledgeable Jewish leaders of the future.

The inaugural class of Millstone Scholars Toronto will begin in Fall 2022. We will accept applications from students entering grades 7 and 8 in Fall 2022 and who currently attend public or private schools. Class size will not exceed 15 students. Applications are due by Wednesday, August 31, 2022.

What is the Program Structure and Curriculum?

The Millstone Scholars Program is a one-year trimester sequence between September and June, aligned with the public school calendar. The program includes three central elements:

Students who complete the program are eligible for further Tikvah learning opportunities. There will also be optional parent learning through ongoing seminars for parents to engage with the material their children are learning and to explore together issues of deepest concern as Jewish parents today.

Through this intensive Millstone Scholars program, our mission is to train and network a group of learned and confident young Canadian Jewish leaders of tomorrow. Read more about the Millstone Scholars Program curriculum below, or contact Rabbi Dr. Abraham Unger at aunger@tikvahfund.org to learn more.

How Jewish Ideas Changed the World 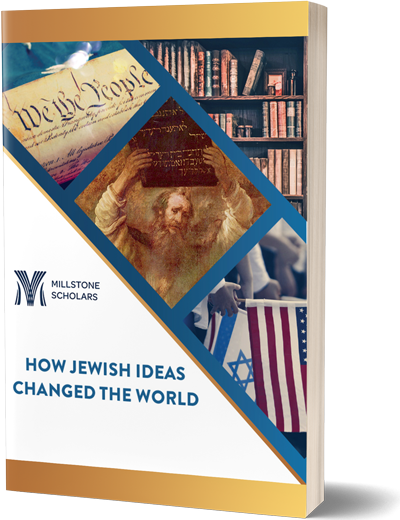 The Millstone Scholars curriculum is rooted in the following beliefs: that Jewish ideas shaped Western civilization and the world; that young Canadian Jews have the right and responsibility to understand their own exceptional Hebraic heritage; and that young men and women in grades 7 and 8 are capable of college-style seminars and discussions. We are looking for intellectually curious students and families who believe in Jewish excellence.

Every Millstone Scholars student will participate in our core seminar—a weekly discussion class, in-person, in your local community. Together with a master teacher, students will read carefully chosen selections from the formative texts of the Jewish people—ranging from the Torah to the Talmud and medieval period to modern thinkers and leaders —in an intellectual adventure that explores how Jewish ideas changed the world. We will discuss the Biblical Creation story and the Apollo 8 astronauts; the story of Abraham and the ideas of Aristotle; the leadership of Rebekah and the longings of Homer’s Penelope; the Exodus from Egypt and democracy in North America; the teachings of the Ten Commandments and the paintings of Rembrandt; the foundational stories of the Jewish people and the writings of Edgar Allen Poe; the rise of the ancient Israelites and the heroic leaders who created modern Israel.

In addition to the core seminar, Millstone Scholars will complete four elective courses, allowing them to study specific topics of greatest interest to them, in conversation with students from around the world, in online seminars offered on weekday evenings and on Sundays. Millstone Scholars will have a vast catalogue of online seminars to choose from, and they will have to complete at least one course in each of our “four pillars”: (i) Jewish thought and history, (ii) Zionism and modern Israel, (iii) the spirit of Democracy, and (iv) the great ideas of Western Civilization.

Why are these four pillars so important? Because we believe that: The CLASSIC TEXTS OF JEWISH CIVILIZATION—including the Hebrew Bible, rabbinic thought, and Jewish philosophy—offer enduring wisdom about the meaning of being human. The ZIONIST PROJECT is one of the great moral, cultural, and political triumphs in human history, and every young Jew should understand the achievements and challenges of modern Israel. DEMOCRACY IN NORTH AMERICA is influenced by Hebraic ideas from the colonial era onward and affording Jews unprecedented liberty and equality. Windows into the Curriculum:

Millstone Scholars courses focus on reading primary texts carefully as a way to explore the great ideas, leaders, and stories that help us understand who we are—as Jews, as Zionists, as citizens, and as part of Western civilization. Click the images below to view sample units.